Okinawa is widely considered the crucible and birthplace of karate.  Karate is most recognized for their very systematic approach in learning a predominately striking martial art.

After Okinawan King Sato paid tribute to China’s Ming dynasty in 1372, trade was opened between the two countries. In 1392, 36 Shaolin martial artists from Fujian province arrived in Okinawa to teach them Chinese martial arts. This led to the development of Okinawan martial arts that were named after the villages of their origin—naha-te, shuri-te and tomari-te. From these three villages arose the various styles of karate, two of which were shorei-ryu and shorin-ryu. After studying these two styles of karate in Okinawa, Gichin Funakoshi (1868-1957) simplified the movements and introduced karate into Japan from Okinawa in 1921. By 1939, Gichin Funakoshi built his first official karate dojo and called it the House of Shoto (Gichin Funakoshi’s pen name) or, as it is mostly called today, shotokan karate. The term “karate” was first used in 1722 when Okinawan martial artist Sakugawa created his martial art karate-no-sakugawa, wherein kara refers to China. Thus, karate originally meant “Chinese hand” or “Tang Hand” after China’s Tang dynasty. However, when karate was introduced to Japan, the meaning of “kara” was changed to “empty.” This is why karate today is translated as “empty hand.”

Ryu means the “way” or “style” and Uechi is the name of the person that the style is formulated from. Okinawa’s current Uechi-Ryu and Shohei-Ryu masters were personally trained under Master Kanbun Uechi’s son Kanei Uechi.

Uechi Ryu is most known and recognized for the body conditioning, unique circular blocking techniques, and half hard half soft fighting concepts. Regarded as one of the main styles of original Okinawan Karate, I feel it is also recognized to be one of the most realistic looking fighting styles in traditional Karate.

The path of the karate-ka (karate practitioner) is self-discovery with harmonizing mind, body and spirit.  Karate’s strategies aim to develop the skills and confidence to protect and defend yourself in combative situations.  Develop many personal qualities such as integrity, wisdom, compassion and humility, which is a substantial by-product of the study of karate.

“To subdue the enemy without fighting is the highest skill.”

“The ultimate aim of karate lies not in victory or defeat, but in the perfection of the character of its participants.” 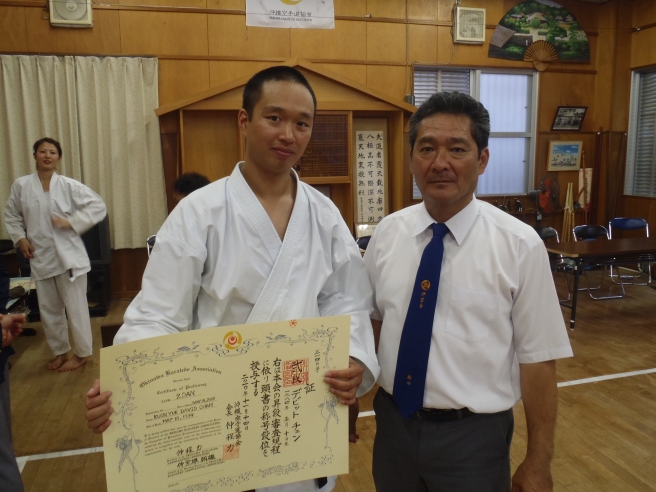 David was introduced to Karate through the popularization of martial arts on television. Impressed by how effectively Karate can be used for self-defense, David pursued to learn the purest form of Uechi Ryu Karate. After years of training David was officially certified as a instructor in May 2013 from the Okinawa Karate-Do Association. Today you can find David teaching classes at the Institute of Combative Arts in Quincy, Massachusetts. He dedicates his time empowering as many people as he can with the world’s most popular martial art. Inspired by his instructors: Billy Giovannucci, Gary Goodman, Michael DeGiso, Russell Centamore, and Jack Summers’ passion to help others, David made it a high priority to provide students with his experiences from the Institute of Okinawan Karate-Do.